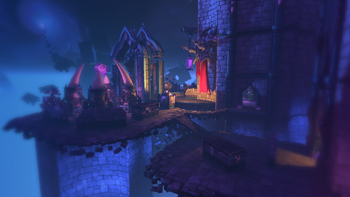 Abyss is one of the maps in Paladins and was released in the Paladins 1.3 update.

This map has an asymmetrical layout that unlike any other map currently in the game, initially starts both teams on spawn platforms that contain a Jump Pad each that leads to the main battleground.

The only Game Mode that is currently playable in this map is Team Deathmatch.

The dark world known as the Abyss is the home of demonic and destructive entities such as Raum and the creature that destroyed the village of Seris.

This surrounds the outside perimeter of the map, making champions with knockback abilities ideal for easy eliminations. Champions that lack flight/teleportation abilities are susceptible to being launched off the map without having any sort of means for recovery...

They exist in 3 locations on the map;

- 2 on the initial spawn platforms

- 1 on the map itself near one of the spawn area for the full ultimate powerup.

Functionality-wise, they will propel any champion that touches them into the air in the direction they were moving upon contact.

A special pickup that grants full ultimate charge will spawn at a specific location on the map. It respawns 60 seconds after being picked up.