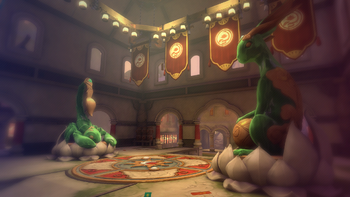 Ascension Peak is one of the maps in Paladins and was released in the Paladins OB68 update.
Like every Siege Map, Ascension Peak also has certain callouts.

Ascension Peak is the mountain Jenos climbed centuries ago. After stepping into the stars, a group of loyal followers and monks were left behind; Buck would later climb Ascension Peak as a monk as well.

When Jenos returned, news spread quickly, eventually reaching House Aico. Khan, the Primus of House Aico was sent to recruit Jenos to their ranks, but they were refused. They retaliated by putting Ascension Peak under siege, though they were eventually defeated by the Resistance.

Ascension Peak also appears to be located near the Thousand Hands main base of operations, as seen in the official map of the Realm.

This information comes from Jenos' bio, as well as the Siege of Ascension Peak lore cinematic.