Battlegrounds was one of the Game Modes in Paladins, released on February 21st, 2018.

It was removed and on June 7th, 2018 this game mode has since then been turned into its own game, Realm Royale. The game is no longer in active development.

Paladins: Battlegrounds is the first-ever hero shooter battle royale. Both teams will spawn onto a truly massive map — more than 300 times the size of the largest Siege map today. Players will hop onto their mounts and start exploring, looting their way through more than four dozen outposts and tracking zeppelins that drop legendary gear. As the fog contracts, the stakes are raised. The last team standing wins, and that's not easy with 100 players!

How to play[edit | edit source]

There are currently 3 queue available of this mode: Solo, Duo and Quad. At character selection, players are given 8 randomly selected champions to choose from, 2 from each role. Unlike other game mode, teammates are able to pick the same character if they want.

Before the match properly begins, there is a 2 minutes pre-load phase while all players spawn into the game. After the 2 minute wait, the player will be dropped somewhere in the massive map (on team matches, all players from a team will be dropped together). Red dots on the map reveal the spawn point of each team. Players can then choose to either seek out other teams or scavenge for items. Unlike other game modes, players can mount and remount at will by pressing Left Shift by default.

Items in Battlegrounds work a bit differently from other game modes. Here, items that grant bonuses when equipped and are found within loot chests, which are spawned in buildings and other locations around the battleground. These chests make a distinct sound that can be heard when near them. There are 3 item tiers (Common, Rare and Epic), each tier stronger than the previous one. Each player can carry up to 4 different items at a time. Players can replace their current items with other ones as long as they are different or are of a higher tier than the ones currently equipped.

Players can also find upgrades for their abilities by collecting cards. Much like items, these cards are scattered across the battleground. The cards are marked with a blue card icon on the minimap. Legendary Cards can only be obtained from special chests that are deployed by zeppelins somewhere on the map once every minute. These special chests are marked with a golden chest icon on the map.

When a player loses all their hitpoints, they are turned into chickens. Chickens can be revived by their teammates, but each player can only revive a downed ally up to 3 times. If a player is defeated again while as a chicken they will die. Turning into a chicken for a fourth time will also cause the player to die. Defeated players will leave behind a chest with their items and cards.

As time goes by, a deadly fog will roll in from the edges of the map in waves, which will gradually consume the battleground and force the teams to converge towards the middle. There is a counter under the minimap that displays how long it'll be before the next wave of fog rolls in, which will then be replaced with a meter showing how much of the area the wave is currently covering. There is also a counter that displays the current number of active players. The last player or team standing will win the match. 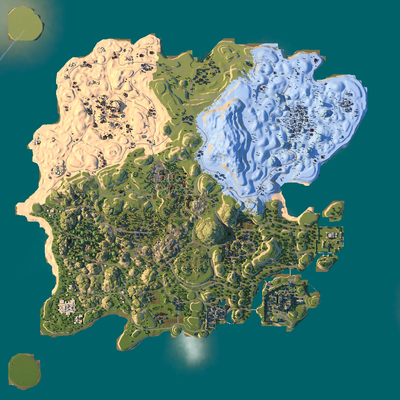