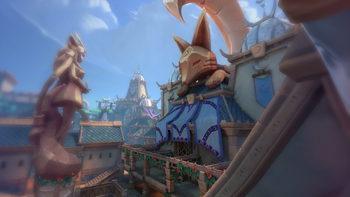 Bazaar is one of the maps in Paladins and was released in the Paladins 2.5 update.
Like every Siege Map, Bazaar also has certain callouts.

The Game Mode that is currently playable in this map is Siege.

Long ago, the moon was once whole, until a mysterious force from beyond the realm would shatter it. Shards of the moon fell to the planet below, and where they landed, life around them was destroyed; all but one. A group of followers came together, building the town of Bazaar around this unique shard. For their goddess, Io, they would care and protect her, praising and vowing to serve her. A group of warriors would come together to prevent the force that had shattered the moon from unleashing destruction onto the realm as well. Things were peaceful.

Until one day, the Magistrate approached. Sensing the power of the shards, they believed they could utilize this force to end the war with the Resistance once and for all. A battle would break out between the Magistrate and Resistance, and with the help of the time traveler Atlas, and the eventual assistance of Io herself, the Magistrate would be repelled, one of their leading officers severely injured.

Though the Magistrate had been repelled, deep in the Shattered Desert, the warriors devoted to protecting the seals would begin to fall. Soon there was only one left. Believing her goddess to have abandoned her, the warrior would release the seals, using the power of the chaos within to bring forth the end of the realm. She would return to Bazaar, as her first order of business was revenge on the goddess who had abandoned her.

It was stated here that the people of the Shattered Desert may not have helped during the Goblin Scourges.

This map has three doors on each side, which only open for the respective team. These doors are marked in the team colours blue or red as an indicator for which team the door will open. After the door is opened, the opposing team has two seconds to run through the door before it closes again. In certain places, champions with vertical abilities can overcome these doors.