The Card system in Paladins is one of the main features that sets the game apart from others in the genre. Cards offer players the ability to empower Champions' attributes and enhance or modify their skills, tailoring them to a particular playstyle. All cards are available to all Champions to use for free. Each Champion in the game has their own unique card collection that cannot be used by any other Champion. Also each Champion has three Talents, which influence the playstyle of Champions the most.

Cards are equipped by Champions 5 at a time in sets called loadouts. Players can increase or decrease the strength of the cards in their loadouts to one of the 5 ranks, however loadouts have a fixed limit of 15 to the total card ranks. 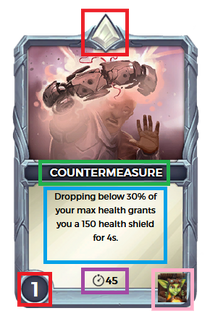 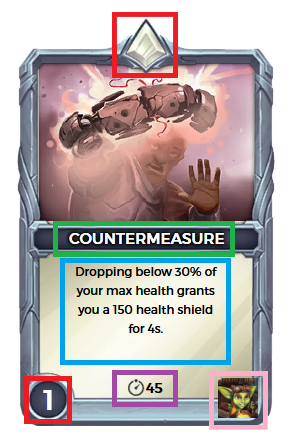 This is the portrait of champion the card belongs to.

This is the card's name.

This area explains what the card does.

This displays how many seconds must pass before the card's effect can be used again. If this isn't present then the card has no cooldown.

Cards are equipped by Champions in sets called loadouts. A loadout is equipped at the start of a match and cannot be switched mid-game. However, if the round has not started, players can repick their loadouts by pressing the loadout key U (by default) while in the spawn room. Every Champion starts with three pre-made Default Loadout, which consists of 5 cards.

Players can create their own customized loadouts through the Loadout screen, which can be found in the Champion's profile, or through the Escape Screen in the Shooting Range. Players have can have a maximum of 5 custom loadouts per Champion. These loadouts must consist of 5 cards with a combined card rank of 15. The rank, which can be from 1 to 5, is displayed at the bottom left corner of the card.

Loadouts cannot be saved if they don't meet the requirements. If an existing loadout stops meeting the requirements for any reason it will be disabled and won't be usable in matches until it is edited and corrected.

These are all the card collections in the game, sorted by Champion: