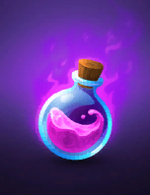 Essence was a currency in Paladins. Essence was used to craft Cards. This currency was removed from the game on December 18, 2017 after a major card system rework.

Essence was automatically obtained in exchange of duplicated cards from Radiant Chests, and could be earned by completing Quests and earning Awards. Players could also receive essence through the Daily Reward login bonus, where the 4th, 5th and 6th bonuses granted essence while the previous 3 days awarded

Completing the Basic Tutorial would award 36,000