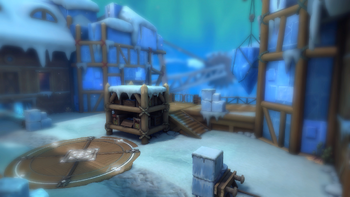 Ice Mines is one of the maps in Paladins and was released in the Paladins CB31 update.
Like every Siege Map, Ice Mines also has certain callouts.

These can be found only on the flank routes near the Capture Point, but they regardless make champions with knockback abilities ideal for easy eliminations, as well as punishing Champions that lack flight/teleportation abilities who are therefore susceptible to being launched off the map without having any sort of means for recovery...

Once the point is captured by either team, these gates will lower during the "Payload Push" phase. After the round ends, the gates close. This limits how much a defending team can zone, and allows attackers get back to the payload faster.