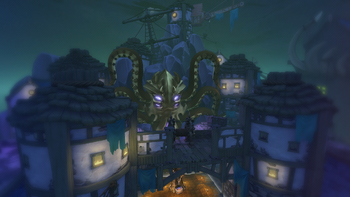 Marauder's Port is one of the maps in Paladins and was released in the Paladins 1.6 update.

This map has a mirrored layout and is designed for 2 teams of 5 players. The bases are located at opposite ends of the map.

The Game Modes that are currently playable in this map are Onslaught and King of the Hill.

As explained here, Marauder's Port used to be an ancient lair for Abyssal Cultists who worshipped the kraken, before it was later found by pirates and turned into a location for them to store their treasure. It currently serves as Dredge's lair.