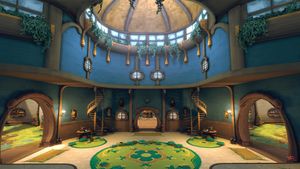 The capture point location in Brightmarsh

Capture Point is a large area located in the middle of maps that run the Siege and Onslaught game modes.

Champions must stand on the capture point in order to increase their team's score. The objective will capture at the same speed no matter how many people are on it at a given time. As a result, having all of the team stand on the objective is unnecessary and often puts your team at risk of being completely wiped.

In Siege, during the capture phase, once a team earns enough points, the capture point spawns the payload cart and is disabled until the next capture phase begins. Capture rate in Siege is faster for the losing team because of the Comeback Mechanic.

In Onslaught, controlling the capture point is a method of scoring tickets for your team.

Its borders will glow based on the following rules:

There will be a diamond-shaped indicator on screen, showing the capture point's location and the distance between it and your Champion.

On Siege maps, the capture point usually is a circular-shaped area and includes a round platform to represent it. The platform's appearance follows the map's theme. In most maps, there are two smaller platforms that look exactly like the one on the capture point, placed in front of each base, they indicate the payload cart destination.

On Onslaught maps, the capture point has a rectangular-shaped area that conveniently fits their location on the map.

By capturing and besieging capture points, each team member receives