Light the fireworks kid, Ameri-Khan is here to party! New to the Realm, Ameri-Khan isn’t wasting any time spreading the good word of Patriotism to all.

We’re continuing with our plan to release large content updates like 1.1, followed by one or two smaller balance and bug fixing updates like this one. The next content update will be 1.3, so keep your eyes peeled for any info that may be coming your way in the next few weeks.

Progressing further in our plan to conquer the earth one gaming platform at a time, we’ve released Paladins on Switch! We will continue to improve all console platforms and focus on polishing the game overall. We also are continuing in our effort to release each update on every platform simultaneously going forward.

Finally, as a reminder this will be the last patch you have to complete you Battle Pass before the next one becomes available in Update 1.3! 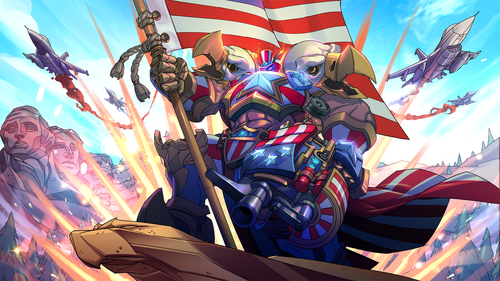 In 1.2, Xbox One, PlayStation 4, and Nintendo Switch players will have access to two special quests. Play 10 games to unlock a free Diamond Chest, and get 250 eliminations to unlock another. These quests will be available until the 1.3 Update.