“Listen up my flag-waving, freedom-loving friends – the 4th of July is about a lot more than just chili dogs, apple pie, and a breathtaking display of patriotic pyrotechnics. It’s also about…wait, go back – the 4th of July is DEFINITELY about excessive expressions of explosive capability! Which is why you can join me – Freegle Drogoz – and my trusty ‘Merican Mustang Mount this holiday for a true red, white, and blue Paladins experience! Your enemies are definitely going to be seeing the rockets’ red glare when we face them together, and it’s a self-evident truth if there ever was one that the ‘Merican Mustang is the hottest ride since the first American muscle rolled off the assembly lines.” – Freegle Drogoz 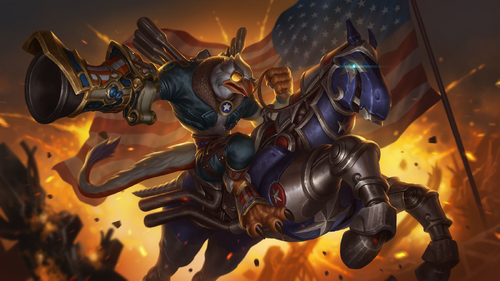 This content is available starting on June 24th, 2020. This content will ONLY be available in the World-Wide Chest for 400 Crystals.

Fixed an issue where the Corrosive Gatling and the Pyre-Forged Gatling weapons were missing textures.