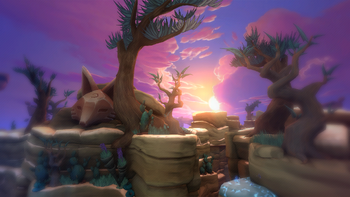 The Game Mode that is currently playable in this map is Siege.

Long ago, the moon was whole. It was united like the Realm once was. But then it shattered, broken, into thousands of pieces. Some shards fell to the Realm. And where they landed, they killed all that they touched. All that remained was The Shattered Desert. A group of martial warriors was formed, and they vowed to protect this location, where chaos was now sealed away.

Until the day came one of the warriors would release the chaos, believing her goddess to have abandoned her. With the seal broken, the Shattered Desert now serves as a reminder of where this catastrophe all started.

This map does not have a strict vertical limit. To prevent champions with vertical movement abilities from camping on the rocks, there are burning grounds that deals Damage over Time. Parts of the map boundary are also made of this burning ground. This burning ground appears exclusively on this map at the moment.

Quicksand reduce the player's movement speed. Quicksand appears exclusively on this map at the moment.