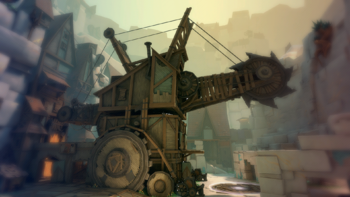 Splitstone Quarry is revealed as the first visible instance of an unnamed mountain/quarry region that feeds Crosswind Hold. The Goblins that were enslaved since the scourges have since spent many centuries mining at this quarry in search of gold. The quarry employs an overseer and a number goblins who utilize the mining suits original created by Barik. Exploring the environment in-game, a number of cave-ins can be found and yellow flower bouquets. This, coupled with the fact that the environmental hazards on the map do not seem very safe or roped off, indicates that the enslaved goblins are working in precarious, high-work-mortality areas.

Can be found on the innermost flank route closest to the Capture Point. Kills champions on contact, making champions with Knockback abilities ideal for forcing other players into the spinning blades of the machinery and back to base after waiting out the respawn timer...

Can be found on the flank route opposite of the drilling mechanism. Kills champions on contact, making champions with Knockback abilities ideal for forcing other players into the molten hazard and back to base after waiting out the respawn timer...