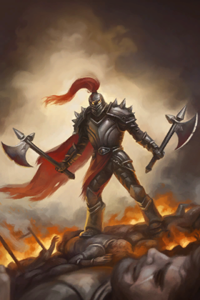 Survival was one of the Game Modes in Paladins. This game mode is currently unavailable.

Survival is a round based death match game mode. Players can change their Cards loadout at the start of the match. Everyone receives 1000

Credits at the start of the match that can be used to purchase Items, and the passive Credits spooling is of 1

To win a round, players must defeat all members of the opposing team before they themselves are defeated. Once slain, players won't respawn until the next round starts. The first team to win 5 rounds wins the match.

A short delay after each round begins, deathly fog will set in from the edges of the map as it closes in on the Epicenter. The fog deals heavy ticks of True damage to any champion in it, forcing all players to move towards the center. Once the death fog reaches the epicenter, it will pause for 60s creating a final fight to the death. If the round is still active after a minute, the fog resumes and consumes the entire map. Any players that die during a round won't respawn until that round ends. The team that manages to survive wins the round. The first team to win 5 rounds wins the game.

These are the maps that Survival could be played in: