Difference between revisions of "Terminus"

Terminus is a Front Line Champion in Paladins, added on October 18th, 2017.

Whatever Terminus once was, he has since become an instrument of war fighting on behalf of the Magistrate. His mind and memories are long gone, his broken body bound by dark sorcery and unstable magic crystals. His form, stuck somewhere between life and death, may be a mere shadow of his former self, but it has also rid him of hesitation and fear.

He obediently charges into battle with reckless abandon, hefting a terrifying battle axe that few mortals could lift and even fewer could hope to withstand.

Terminus is a front line champion whom not even death can keep down. Terminus' Massacre Axe allows him to deal damage to all enemies in front of him. His Power Siphon skill allows him to absorb enemy attacks and turn the damage into charges for his Calamity Blast skill. Shatterfall lets him leap and crash down with his axe, dealing damage and slowing enemies in the area. Terminus' ultimate skill, Reanimate, grants him the ability to revive after being killed and deal a fair amount of damage around him upon resurrection. The only problem is you have to be very close to your target to deal damage. He is best at keeping/taking an objective.

Shatterfall Stuns enemies hit for 1s, but no longer Slows.

This is a list with all cards available to Terminus:

All of the following cards are in Terminus's pre-built loadouts: 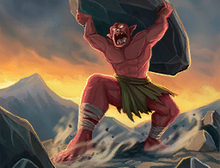 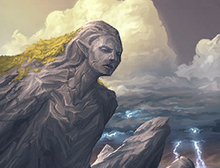 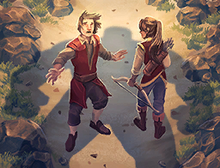 Increase your Movement Speed by 10% for each Calamity Charge you have.
5 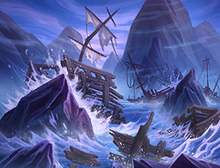 Reduce your damage taken by up to 16% based on the number of Calamity Blast charges you have stored.
4 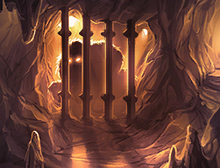 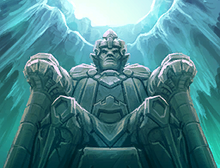 Reduce your damage taken by 24% for 3s after landing with Shatterfall.
3 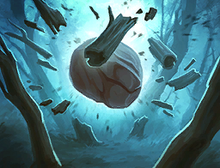 Increase the leap distance of Shatterfall by 40%.
4 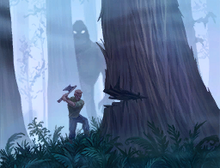 Reduce the Cooldown of Shatterfall by 0.9s for every 1s spent channeling Power Siphon.
3 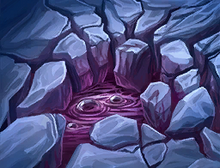 Gain 24% Power Siphon charge for each enemy hit with Shatterfall.
4 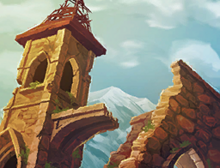 Heal for 180 for each enemy hit by Calamity Blast.
3

Increase the leap distance of Shatterfall by 10%.
1 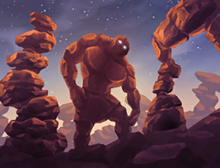 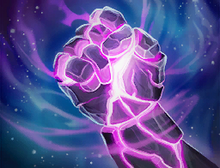 Reduce the damage required to generate a Calamity Blast charge by 600.
5

These are the Cosmetic Items currently available for Terminus:

Attack 20% faster when you have no Charges of Calamity Blast stored.