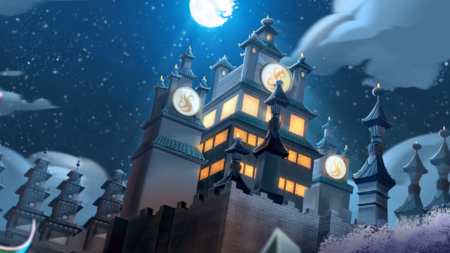 During the Golden Age of Crosswind Hold, a number of noble houses develop under the Magistrates rule. Zhin belonged to one of these houses, though at some point early in his life, he was robbed or displaced from heritage. Forced to survive on his own, Zhin started to operate as an underworld thug. Not before long, his expertise in crime and leadership allowed him to create a network of loyal like-minded bandits - a network he would grow into the shadowy empire of the Thousand Hands Guild.

One of Zhin's earliest supporters and henchman was Sha Lin, the Desert Wind. Always looking for unusual talent, Zhin employed Sha Lin's magical mirage capacities to quickly maneuver and confuse enemies to deadly effect, but Sha Lin ends up betraying his guild and freeing Ying, who was captured by the Guild. The pair escapes, much to Zhin's wrath.

Following this demonstration of in-guild infidelity, Zhin decided to share his signature flame-projectile combat style with a new disciple: Koga. But Koga was inevitably betrayed, turning the Thousand Hands against him. Koga quickly retreated, vowing to exact his revenge.

By this time, Skye, who had separated from her royal house very early similar to Zhin, had already developed a name for herself. While she was attracted by the thrill and freedom of the underworld criminal life, her flirtatious predilection for ruthlessness and murder attracted Zhin's admiration. The moment seemed perfect: she promptly enlisted with the Thousand Hands and filled as Zhin's newest, and potentially third, disciple.

How long was it, since Koga last climbed these walls? How long, since he last stood among the Thousand Hands. This was not how Koga thought he would return to his family. But family doesn't try to kill you. Family doesn't brand you a betrayer. No longer would he wait. Koga would face his former master and Zhin would pay. The Thousand Hands would never forget the day Koga left, but the day he returned would be far worse.

Koga returns to face his old master and to demand the answers to his betrayal. To his surprise, Skye intervenes on Zhin's behalf, and the duo fight it out. While the results of the battle are inconclusive, we know that both duelists and Zhin survive the encounter.

After that, Koga joins the Resistance.

Skye shifted away from the Thousand Hands, enamored with the paygrade of the Magistrate's contracts. Her skills proved instrumental to Karne, and she quickly rose to a personal advisorship.

Ever-married to the idea of the common people's heroes, Ying and Sha Lin join the Resistance.

Zhin, understandably infuriated at all the guild defectors, remains stalwart in his goal of crime and bounty. The Thousand Hands serve as a mercenary faction, hirable by both Magistrate and the Resistance.