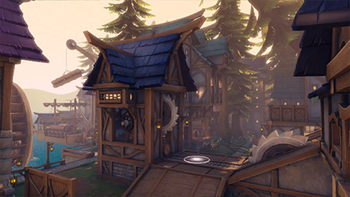 Timber Mill is one of the maps in Paladins and was released in the Paladins CB33 update as part of the Enchanted Forest map. With the Paladins 4.2 update this map received a major visual rework.
Like every Siege Map, Timber Mill also has certain callouts.

This is one of the few maps that don't have mirrored layouts (the two parts are still identical, but instead of mirrored, they are rotated 180 degrees) and is designed for 2 teams of 5 players. There is a Capture Point in the middle. The bases are located at opposite ends of the map.

There exist two on this map on each team's appropriate side. Entering one will teleport a champion to the top of the building they are connected to; making them ideal for ease of access to higher ground.