The Top Play was shown after every game of every game mode. It was removed along with the Killcam in Paladins 3.2 update. You can read about the full reasoning behind the removal in this developer blog.

After finishing any match, a screen would appear, introducing the Top Play of the Game to everyone in the match. The Top Play consists of:

An example of a Top Play in Brightmarsh.[edit | edit source] 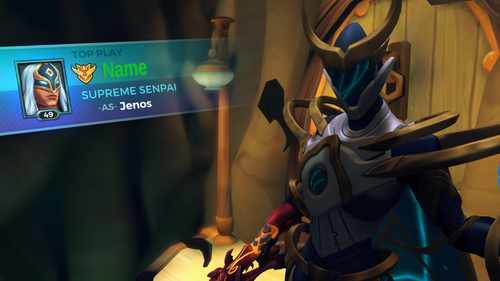 Furthermore, the Champion's model will be shown and a short animation would play, followed by one of their Top Play voicelines.

After the clip ends, everyone will be redirected to the match details.

There was a minor glitch that instead of redirecting everyone to the match details, everyone would return to lobby, this would occur in servers with high latency.

There were three ways of getting a Top Play in Paladins;

After Top Play was introduced to Paladins, multiple visuals glitches appeared in the game, those include: