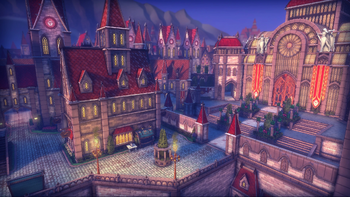 Trade District is one of the maps in Paladins and was released in the Paladins OB65 update.

This map features an asymmetrical layout and is designed for 2 teams of 5 players. The initial spawn locations are located at opposite ends of the map.

The Game Modes that are currently playable in this map are Team Deathmatch and King of the Hill.

In the shadow of the Magistrate's Stone Keep, Trade District is usually bustling with trade and commerce from around the Realm. But now, the streets are filled with the ongoing conflict between the Magistrate and Resistance.

This information can be found here.

Can commonly be seen around the map, making champions with knockback abilities ideal for easy eliminations. Champions that lack flight/teleportation abilities are susceptible to being launched off the map without having any sort of means for recovery...