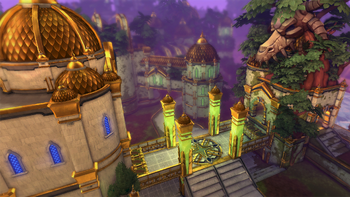 Warder's Gate is one of the maps in Paladins and was released in the Paladins 1.9 update.
Like every Siege Map, Warder's Gate also has certain callouts.

One of many ancient Warder architectures, with a mystical forest located nearby, as revealed here.

Anti-Gravity Crystals let champions who enter their radius slowly fly upwards. After that, they glide back to the ground, they appear exclusively on this single map at the moment.