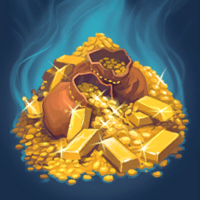 Gold is a type of currency in Paladins. Gold can be used to unlock Champions and to purchase certain Cosmetic Items. Gold can be boosted by active Party Boost and 5% Account Booster.

for the first two matches of each game mode. Players can also receive gold through the Battle Pass.

Gold can also be earned from the Refer-A-Friend system.