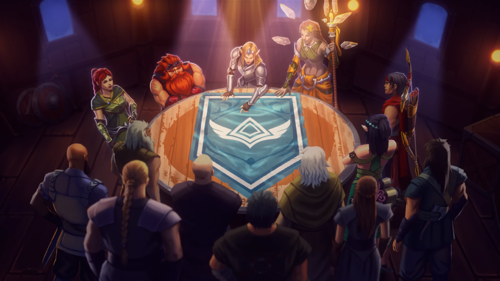 Welcome to the Lore Page where you can easily navigate through the various characters, groups, locations, races and events in Paladins' story.

Please avoid adding fanfictional content, this is an archive for official lore.

Outer Tribunal
The Outer tribunal is a law enforcement group on behalf of the Magistrate whose purpose is to hunt down criminals in the name of the law. They also battle horrors and abnormal threat for the side of justice. Though this is probably only with Androxus and Lex; a judge is proficient in dual wielding firearms, most preferably pistols.

Paladins (Former)
The Paladins was a group of magical warriors who united the realm through strife and sacrifice.

Sentinels
The Sentinels were a military elite unit working under the magistrate taking the most difficult of missions.

Summer Court
The Summer Court are a group of faeries who wage an endless war against the encroachment of modern civilization.

Warders
The Warders were an ancient group who were able to tame Dragons and channel their power with things like the Warder's Relic.

Darkness
The Darkness will be a creeping, otherworldly corruption and will wipe out everyone of the Resistance and Magistrate in the future of the Realm.

The Realm is the place where the action of Paladins takes place.

This list only accumulate the base skins and skills. Alternate skins and lores are not taken into consideration.

Lore of the Alpha Champions